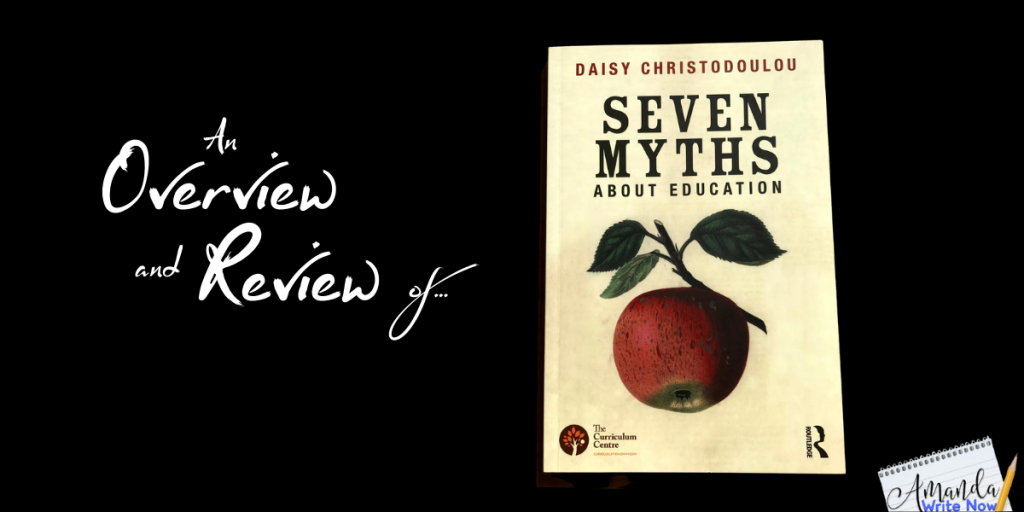 Before we get to this overview and review of 7 Myths About Education, I have a question for you…

How big is the stack of books you want to read this summer? If you are like most English teachers, the stack is sky high. This is exactly why I’m hosting The English Teacher Summer Reading Series!

What is The English Teacher Summer Reading Series?

It’s a free event that is happening between June 4th-August 7th!

Attendees of the event will:

Here’s an example from an important book I recently read called 7 Myths about Education by Daisy Christodoulou.

Sign Up for the English Teacher Summer Reading Series

1 Sentence Summary of the Book

“The reason why students have such poor skills and know so little is because we have failed to teach them those important skills and knowledge.” (Christodoulou, 3)

Overview of the Book

Myths are widely held false beliefs; in her book Christodoulou convinces readers that there are 7 myths pervading educational systems around the world and most negatively impacting students from low socioeconomic backgrounds.

Christodoulou demonstrates, with facts and analysis of evidence, that there are major problems with educational programs for teachers, the way we educate our children and the way leaders are trying to go about improving schools.

For each myth, the author uses two categories of evidence proving the myths exist: theoretical and practical. The theoretical evidence is based on what both past and present educational philosophers and theorists have published about how to teach.

The practical evidence is based on teacher training literature, testing questions, test results and teacher observations by The Office of Standards in Education, Children Services and Skills (Ofsted) based in the U.K.

Here are the myths:

For time’s sake (I know there are busy teachers reading this), I will only summarize the chapters about myths 1 and 2. According to Christodoulou, myths #1 and #2 are the major, foundational myths that make all the others possible. So, once you understand the first two, you can easily see how they stem out to form the other false beliefs.

This chapter (and every chapter proceeding) begins with Christodoulou explaining where there is evidence that people actually believe the myth.

Myth #1 began with the teachings of Jean-Jacques Rousseau in his publication Education. In this book, Rousseau says teachers should not use verbal lessons but that teaching through experience alone is best.

John Dewey also emphasized learning by doing. Christodoulou goes on to provide many excerpts from the publishings of multiple educational theorists to demonstrate how the myth that facts prevent understanding grew in influence. She even uses excerpts from popular literature by Charles Dickens!

Next, Christodoulou uses training books used in educational programs for teachers and teaching manuals used in schools to prove this myth is in action in modern day times. She also points to the school standards used in the UK to do this.

Anyone reading Common Core Standards can see the lack of details around factual knowledge students should acquire. The focus is instead on the skills students will come away with.

After proving the myth exists, Christodoulou presents studies about how the human brain works and has two ways of storing information, working memory and long term memory.

She shows how we can store more in short term memory through something called chunking. The example used in the book of this process is presenting someone with 16 random letters for 5 seconds and then having the person repeat all the numbers back. It’s impossible to store that much in short term memory. However, if presented with those 16 letters as chunks of words, the cat is on the mat, it’s easy to store this information in short term memory.

The point is that when we learn strategies (like the letter sounds and blending to read words) this information can be stored in long term memory. The more information we can commit to long term memory, the better because we conserve the limited space we have in working memory.

Why is this so important and what does it have to do with the false belief that facts prevent understanding? Christodoulou says it best…

“Critics of fact-learning will often pull out a completely random fact and say something like: ‘who needs to know the date of the Battle of Waterloo? Why does it matter? Of course, pulling out one fact like this on its own does seem rather odd. But the aim of fact-learning is not to learn just one fact–it is to learn several hundred, which taken together form a schema that helps you to understand the world.” (Christodoulou, 20)

Christodoulou also asks us to consider Bloom’s Taxonomy and the way in which it is set up. Many educators (myself included) have always considered “knowledge” as “lower-level”. Christodoulou proposes that we stop thinking about the taxonomy in this way. Rather, we should think of it as knowledge being the foundation for all other thinking processes. She makes the case that actually knowledge and skills are deeply intertwined, you can’t have one without the other. When teachers involve students in “higher-order” thinking they must make sure students have the appropriate facts and knowledge base first.

Christodoulou provides many examples demonstrating that with a lack of facts and background knowledge, students don’t have the resources and information necessary to think critically about the topic for which we are teaching

In the last paragraph of the chapter Christodoulou differentiates between fact learning in and of itself versus the teaching methods of imparting facts. She admits these are two different aspects of the issue.

In this chapter, again Christodoulou goes into the theoretical and practical evidence that this myth, teacher-led instruction is passive, exists. She starts with the educational theorist and philosophers Rousseau, Dewey and Freire.

Based on all the quotes from the literature these men published that Christodoulou provides, it is clear that to these, “educationalists, teaching facts is bad for two reasons. First, it is actually immoral. It damages the child. It knocks all the joy and spontaneity out of childhood and turns the child into a passive and unthinking creature. Second, it is ineffective. It does not work.” (Christodoulou, 29).

First, Christodoulou provides a bit of background about Ofsted. The associates of this governmental organization observe teachers and provide reports to schools about their findings, which could lead to the closure of schools if the results are unsatisfactory. These observations are pre-arranged which means that often the teachers have to “put on a show” in order to attain satisfactory or outstanding results.

So, what are Ofsted associates looking for? Christodoulou uses 228 lesson reports to break down what exactly is praised and what is criticized by Ofsted. She uses a multitude of direct quotes from Ofsted teacher evaluations (which are in the public domain) to show, “They [Ofsted] warn the teacher against giving too much direction. Teachers are warned not to talk too much and not to tell pupils things. They are encouraged to plan lessons where pupils discuss something they already know or where pupils find things out for themselves, often in groups of peers…In the lessons that are criticised, very often the feature being criticised is the teacher talking too much, or imparting facts of teaching activities that involve factual recall…” (Christodoulou, 31)

Christodoulou goes on to describe how detrimental it is to students when we don’t explain things to them in direct ways. She helps us realize that students who aren’t taught facts lack long term memory storage and therefore become overwhelmed with all they have to grapple with in their short term memory

5 Key Takeaways from the Book

A Few Favorite Quotes from the Book

“An argument levelled against this approach [direct instruction/teaching facts] is that it is boring and demotivating. Of course, in the wrong hands any method can be boring.” (Christodoulou, 41)

Other Authors Referenced in the Book

Review of the Book

Daisy Christodoulou didn’t have to do much to convince me that these 7 myths exist, everything she wrote about resonated with my experience as a teacher and my keen interest in social justice issues.

I can’t understate the importance of this book. The more teachers read it and become fully aware of these myths, the better our educational system will be for it.

Teachers (myself included) who want to motivate and engage their students get caught up in making learning memorable with “student-centered” activities, simulations and projects. They believe (myself included) that as long as they are providing time for students to read and write, students will improve and become avid readers and writers. Through her book, Christodoulou has made me realize that the last statement is a pervasive educational myth too.

Christodoulou makes clear in the book that she is not criticizing methods to engage students. She believes whole-heartedly in doing things in the classroom that are motivating for students. What she is criticizing is the common held belief in education that factual, rote learning and direct instruction aren’t that effective and that we need to steer clear of these methods.

I am now a firm believer that facts and direct instruction are vital components of our teaching practice that must stop being taboo and instead be prioritized in order to serve our students, especially those from lower socio-economic backgrounds who have less access to books, museums, travel and knowledge about the world.

If you read only one book the rest of your teaching career, I recommend that you choose this one.

I’m so excited for English Teacher Summer Reading Series 2021! If you would like this kind of information for 8 popular professional development books this summer then you can sign up by going to bit.ly/summer-reading-series-2021. I can’t wait to connect with you soon! 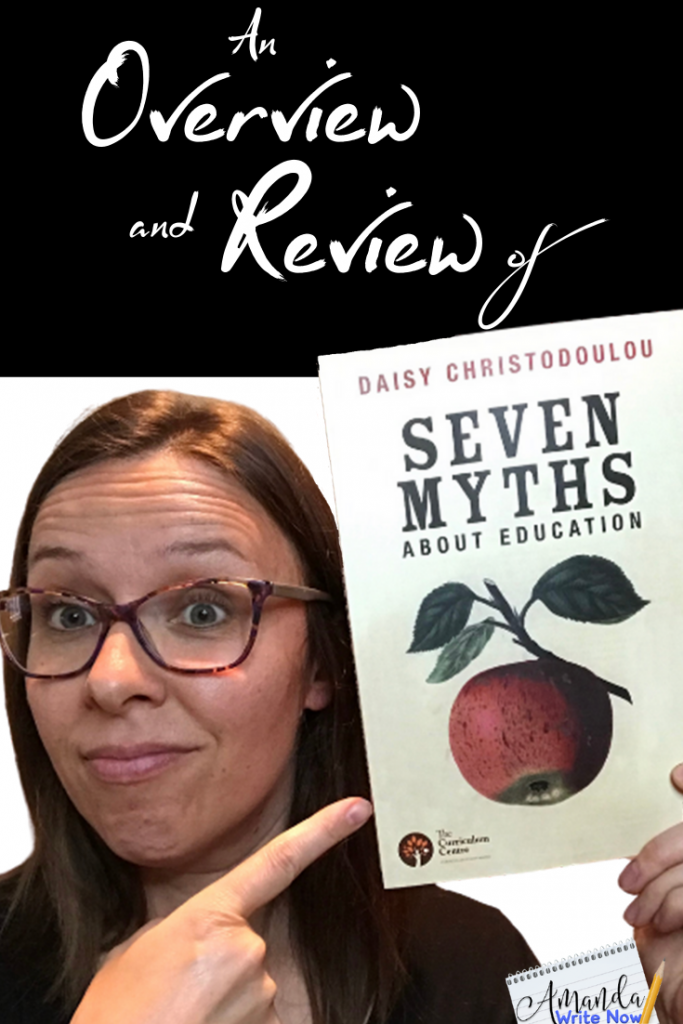 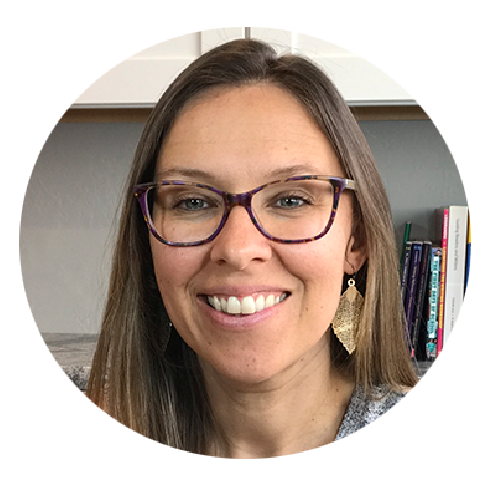 Amanda has spent 14 years teaching grades 3rd through 8th. She is a an advocate for social justice in schools, reads educational literature voraciously and enjoys sharing what she learns on her blog and podcast.